In  my adventures visiting front yard gardens, sometimes sparks will happen. Revisiting this front yard garden near Dale and Ivy was one such occasion. His name was Will, and he embodied the spirit of enthusiaism I also hold inside for gardening and growing food, and the “green world” of this interconnected Earth we live on. 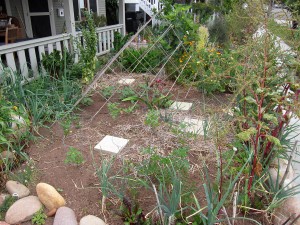 I’d seen this garden a few times, and talked with him tending it about year ago. The other day when I swung by to photograph it, he was out front. He didn’t have much time to talk as he watered before running off to his job at a bank, but he later sent me his story. I love his metaphor of the rambling bamboo. 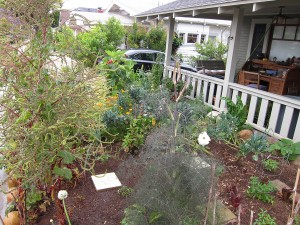 “My story is like the rambling nature of say, the running bamboo: starting in one place, following the water and nutrients to another, and popping up in all sorts of unexpected places and ways. Oh yes, and almost impossible to eradicate! 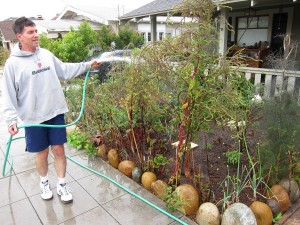 “I grew up in southeastern Wisconsin in the 1960s, surrounded by corn fields and dairy farms. While my parents were professional people, I always seemed to gravitate to outside activities and vocations. I began my first garden in third grade, learned how to raise worms and feed chickens, and spent many a summer in the lake and forest country of northern Wisconsin.

After failing to gain acceptance to medical school in the 1980s, I travelled around the country and eventually settled in Washington State. There I met several mentors and friends involved in the Seattle Tilth movement:   http://seattletilth.org/ I am eternally grateful for the knowledge shared and experiences gathered during these days, culminating in working with the founder of the Permaculture Movement, Bill Mollison:   http://www.permaculture.org/

As if this was not enough, I also enjoyed an incredible encounter with Masanobu Fukuoka, promoter of no tilth agriculture and author of The One-Straw Revolution:  http://www.onestrawrevolution.net/  His humble yet powerful presence was sublime.

Moving to California, I began growing food for my family in a small back yard of our home in San Luis Obispo. I began supporting local agriculture by shopping at the local famers markets, toured the CalPoly agriculture facilities and exhibits, and furiously ordered seeds and supplies. I almost earned the right to take care of a local shrine of gardening and history known as the Dallidet Adobe:  http://historycenterslo.org/?page_id=80. But as with the bamboo finding an obstacle, either from within or without, my path had to twist and turn a bit further.

Many occupations and fields of human endeavor later, I find myself here in San Diego working for a major financial firm. The pay lets me stay a landowner instead of a sharecropper, and until I can find a way to harvest my insatiable desire to garden, I will continue to learn small scale farming in the short spans of time I am allowed. I am happy to be providing endless entertainment to neighbors and passers by, many of whom urge me to move to the country. Somehow I feel not ready to tackle any more land at present, as the rocky clay soil of our area proves most challenging.

Well, that is a brief description of my relationship to the land upon which I roam. In closing, I would say that the Earth is my first and best teacher, and that when I listen closely, I always have a better time. Thanks!” 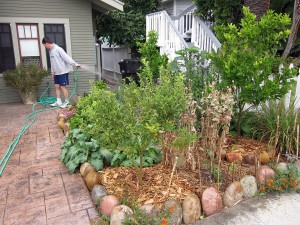 Brugmansia and Datura: Beauty and Power