Keep Your (Garden) Drawers On

Vegetables need lots of sun: at least 6 hours, but the more the better. I was looking for a way to raise a planting area high enough to not be shaded by the Valerian plants in my garden plot at the community garden. I’d also wanted to make the soil deeper, since the soil in the community garden plots is only about 8 or 9 inches deep, at most, before you hit the gopher mesh. The gopher mesh is wire mesh that stops the gopher from digging up into the garden. Roots can go below it, but don’t really like to, because it’s crappy San Diego hardpan; and you can’t dig any deeper than that to do things like mix in amendments.

In any case, most vegetables like a  deep, rich, loose soil, and this way I could really add some good soil of my choice, and do some “French Intensive” gardening. By intensive I mean growing lots of plants in a small space.

It also has the benefit of being a barrier for any critters that might get past the electric fence.

I went exploring some local alleyways on my bike – a fun excursion since I’d often seen pots and many other useful things there, including backyard vegetable gardens and fruit trees with fruit hanging in the alley, ready to eat.

Well, I didn’t see any pots, but I did spot something that gave me an idea: some old wooden drawers. All I’d have to do is knock the bottom out and boom, instant raised bed! They could be stacked up for greater depth! I marked the location in my phone and came back in the car and picked them up. 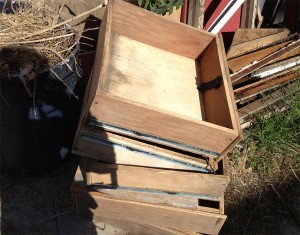 Old wooden drawers in an alley. One man’s trash is another gardener’s treasure.

The first step after knocking the bottoms out with a hammer was to stack them up – seemed like two was the right height (three took them too close to the height of the electric fence wire, and a temptation for ground squirrels to jump over). 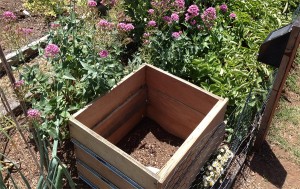 Ready to start filling with soil.

The next step was to layer soil in. I wanted to use a mixture of the local native soil plus amendments, and not just used bagged or bought soil. This way i would get the microorganisms that are beneficial, plus get more sand. Sand is good for drainage and soil texture.  using soil from the end of one of the pathways, I removed the rocks (our local San Diego soil is full of sand, clay and rocks).  Then adding compost from a bagged mix, plus some organic fertilizer, I mixed these together with a spade before adding  another layer. This was then watered of course. I also planted some earthworks from the plot in it. 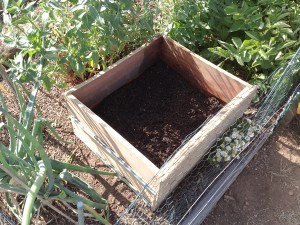 Beginning to fill with soil.

It’s best to let this new soil sit for a few days before planting. That way the community of organisms – including hopefully earthworms – can start to stabilize and process the new mix. Soil is a living thing. And physically it can settle in too. 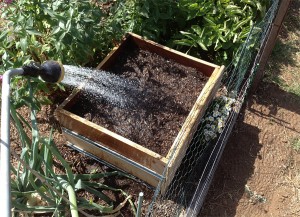 Time to plant some seeds! I take photos when planting seeds in order to help me remember where they are and what is planted.
On the left are Kentucky Wonder Pole beans; in the middle are Rams Horn beans, and on the right Blue Lake pole beans. These are all vine types, so will need a stakes or a trellis to grow on. This was May 25th: 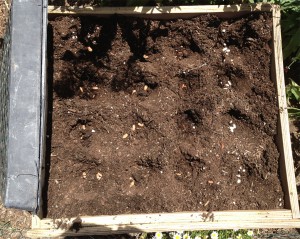 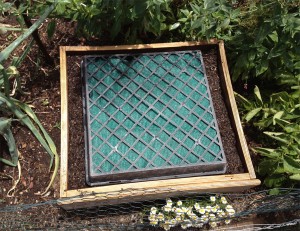 Its important to keep seeds moist before they sprout. I used a piece of shade cloth in a discarded plant tray and laid it over the bed.

After the bean seeds were covered over, I planted a mix of radishes, beets, a little Cilantro, and some carrots. (These had accidentally been mixed together in a in a ziplock bag I’d been using for storing seed packets). The idea is to have these lower-growing veggies under the beans, which will be vertical. They also don’t need quite as much sun. They will benefit from the nitrogen-fixing activity of the beans too! Like all legumes (bean family) plants, beans accomplish the miracle of taking Nitrogen from the air, and using  a partnership of bacteria in root nodules, convert it to a form that plants can use.

Only four days later, and the beans are starting to emerge! The Kentucky Wonder Pole beans, which was fresh seeds from last season that I harvested from my vines after they dried out, were the first to come up. This is May 29th: 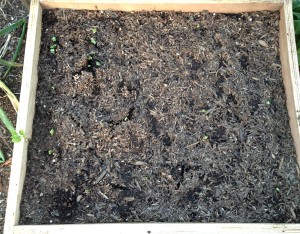 A day later, May 30th. The radishes are starting to sprout also: 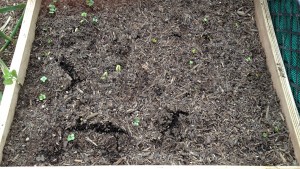 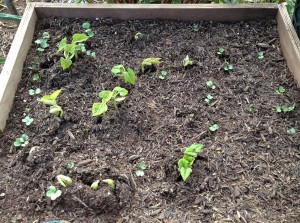 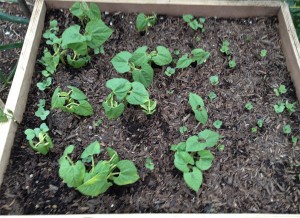 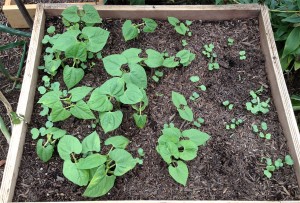 June 9th. The bean leaves are starting to fill out. Thinned a couple of plants. Have yet to see if the beans are going to shade the radishes and beets too much. This is an experiment. 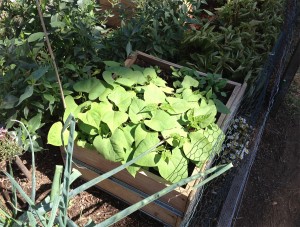 Some radishes did manage to grow just fine down underneath the beans! I grew a rainbow radish mix called “Easter Egg II”, from Renee’s Garden. Beautiful colors, and some were sweet. I really enjoyed growing, eating and sharing these with a friend. 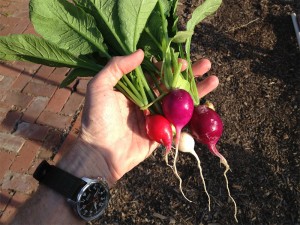 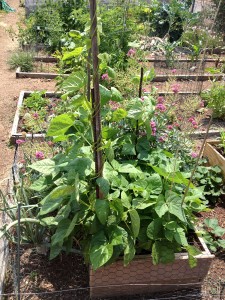 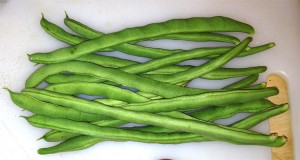 By August 1st, the beans are flourishing, flowering and fruiting a-plenty, and I’m eating them straight off the vine for snacks. And steamed, on top of rice for dinner. Especially the Kentucky Wonder Pole beans! They are very productive. 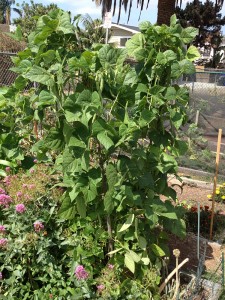 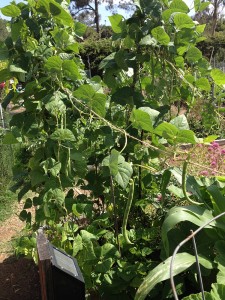 End result of those months of toil and joyful tending: dried beans ready to cook or plant next year. I made a wonderful pot of beans in the crock pot from these!: 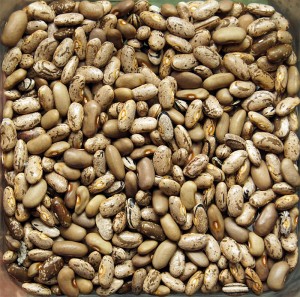