Powdery Mildew and What To Do About It

It is debilitating to the plant, and the vigor of the plant will be greatly reduced as well as the vegetable production. It’s better to address it as early as possible before it spreads and becomes harder to control, and the plant is weakened. 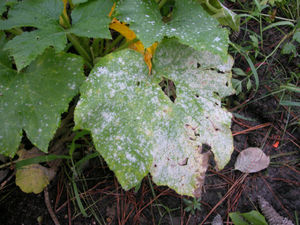 The humid weather plays a part, as well as the fungus spores being in the air. Generally the mildew starts with the older leaves, but it will get worse and worse and infect more parts of the plant, spreading on newer leaves as well unless it is checked.
Fall vegetable crops will be susceptible.

It’s also important to address it because the spores will blow and spread to neighboring plots.
Last year I tried Neem oil and a soap and water solution, with marginal results.

One day I was fortunate to meet a highly experienced agriculturalist at the Hillcrest Farmer’s Market. He grew melons in the East County of San Diego (much warmer climate than the coastal area where I live), and he told me about a spray for powdery mildew that’s quite effective. Believe it or not, it consists or non-fat milk and water (10 to 20% milk).

Using milk spray may seem counter-intuitive, because it sounds like something that would create more mold, but in fact powdery mildew is a completely different kind of fungus from what would grow on milk. Experience and scientific trials have shown this works.

He mentioned powdered non-fat dry milk, so that’s what I’m trying. Here’s an article about it:
http://www.appalachianfeet.com/2010/07/02/how-to-spray-milk-to-prevent-powdery-mildew-disease/

It’s important to attack the problem AS EARLY AS POSSIBLE:
As the article I referenced said ” typically work best as a preventative rather than as a cure… If you see any signs of powdery white spots on the upper or lower sides of leaves, it’s time to spray.”

Also do not water your crops late in the day, as the extra humidity will encourage fungus growth. When you do water, water the soil not the leaves. That’s always a god rule to follow generally.

I would encourage anyone that sees powdery mildew beginning on their crops to start spraying. Also prune out the badly infected leaves.

I’ll let you know how my trial goes.
Here’s my formula – I used a blender to mix it:

This works well – better than the Neem oil spray and the detergent-in-water spray, but like those other solutions, you have to keep at it.